2. The Wabbit gets Pulled 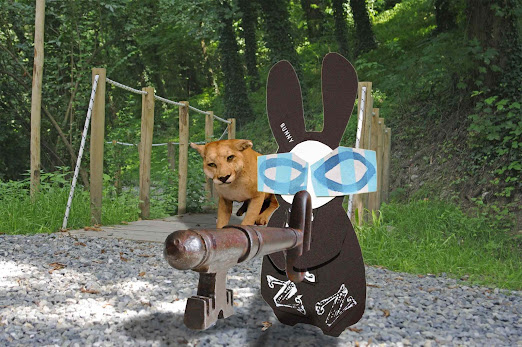 The rusty old key became larger and larger - and as it grew the magnetic force increased. It was completely stuck to the Wabbit and he had no choice but to let it pull him along. The key took him onto the hillside and he hopped quietly behind it because he knew the path quite well. He was thinking about how to detach from the key and had come up with several unworkable ideas when he was interrupted by a recognisable voice from behind. "Hello Wabbit!" The Wabbit hadn't bargained on hopping into anyone he knew and he felt slightly embarrassed about explaining. He wasn't really able to look back because all his efforts were concentrated on the key. "Hello Puma," he said, without turning. "What's happening Wabbit?" answered Puma. "Oh just some small key business," said the Wabbit and he kept going because he had little option. Puma paused and growled a little. "I don't believe you," he said. "Besides, it's a very large key. And you seem to be stuck to it." "I'm trying to find out where it's going," said the Wabbit. "It's taking you where it's going," said Puma, "so I'm calling in help." "Not at all," said the Wabbit. "Then I'll come with you," said Puma. "OK," sighed the Wabbit. "Just don't touch the key." "You got the right key, but no keyhole," hummed Puma and he loped along after him.
at June 12, 2013