1. The Wabbit finds a Secret Key 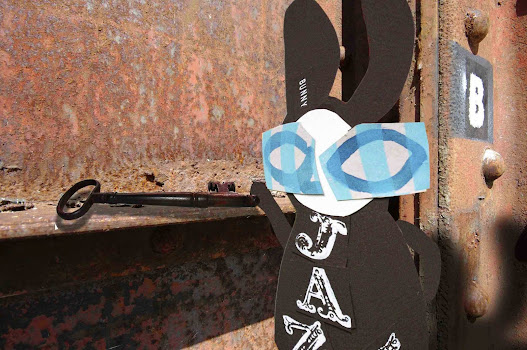 The Wabbit was between adventures and it was a place he didn't like. So he chose to wander through Pluto Park for a constitutional hop and time to think. He hopped and hopped and thought about this and that. But when he passed the decorative girders he admired, he looked at the rust - and for an instant he was at one with the little flakes of iron, turning red in the passage of time. "Time and tide wait for no rabbit," he mused. He was pleased with that and tried another saying. "Pass therefore not today in vain," muttered the Wabbit, "for it will never come again." Just before he became maudlin, a metallic clink caught his attention and his ears swivelled. There, on an iron ledge, lay a rusty key. It was rather large with a barrel stem, but despite its rust and age, tell tale scratches told the Wabbit it had been recently used. "A secret key," gasped the Wabbit. He paused for a moment and tried to think what door the key would fit. He could think of no such door. "I need to find the door for this key," said the Wabbit, "and then I can return the key to the owner." But as the Wabbit touched the key, he was instantly seized by a powerful magnetic force and he couldn't shake it free. The Wabbit stared. "Looks like the key comes with me," he sighed.
at June 11, 2013