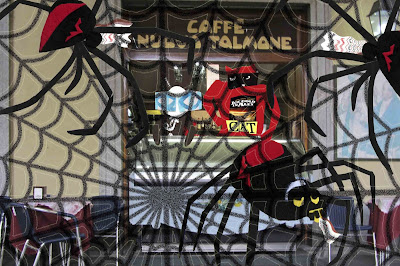 The Wabbit and Skratch the Cat dived for the ice cream kiosk in the New Talmone Caffè and looked out. With the speed of light, a vast web dropped like a curtain - and as the portico darkened, Marshall Duetta and her Red Spiders descended on their victims like a horde of locusts. Skratch and the Wabbit could only watch as relentlessly, the Spiders snared the Spam. Normally the portico would be busy. But local inhabitants had learned to read the signs and there was absolute silence - except for the clicking and snickering of spidery legs and the odd squeal of a captured Spam. The Wabbit dug Skratch in the ribs, and in return Skratch slapped the Wabbit on the back. "Do you fancy an ice cream?" asked the Wabbit. "Oh I don’t mind if I do," said Skratch. The Wabbit looked down at a vast variety of ice cream. "There’s still some of Wabsworth's old Spam flavour," he observed. Skratch grimaced. "If you don’t mind I’d rather have vanilla." "Plain old vanilla?" said the Wabbit. "Where’s your innovative cuisine?" "I left it in the back of a drawer, where it belongs," said Skratch. "Well, I’m going to have carrot flavour," said the Wabbit. Skratch sighed "You always have carrot flavour." "Why change a winning formula?" grinned the Wabbit.
at June 06, 2013