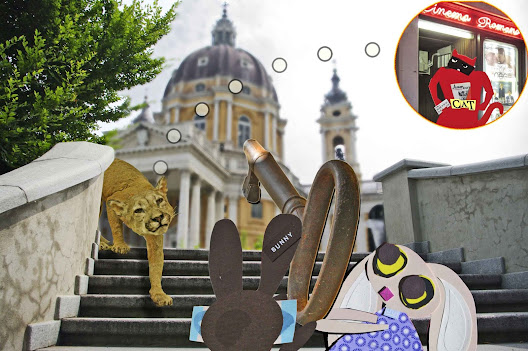 The now enormous key dragged the Wabbit and Lapinette up the steps to the Old Basilica and the end glowed even brighter. Puma loped ahead on a detour and suddenly emerged in front of them. "This isn’t going well!" he hissed, "shall I get some assistance?" Both the Wabbit and Lapinette shook their heads. "No, no." said the Wabbit, "we can handle this, can’t we Lapinette?" "Of course we can," said Lapinette quietly. "Who better at key handling than us?" Puma looked at them with a worried face. "They might be embarrassed," thought Puma, "but I can’t let this go on. I’m going to get help anyway." Puma let out an enormous roar that shook the branches and made the Wabbit’s fur stand up sharply. "What was that for, Puma?" asked the Wabbit. "It’s my key handling roar," lied Puma and he did it again. The Wabbit shrugged and continued to follow the key helplessly. But far across the city outside a small repertory cinema, Skratch the Cat pricked up his ears. "Puma needs help," he said to himself and he listened attentively. "Yes there it is!” he purred and he started to trot quickly. But Skratch heard another sound that was somewhere between a scream and a shriek. His trot gave way to a lope and the lope to a bound. Soon he was on the edge of the city and heading up the hillside.
at June 14, 2013