11. The Wabbit & the Swift Getaway 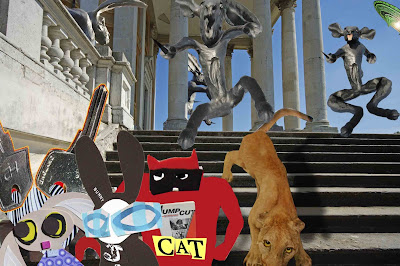 No sooner had the gang left the building than heard blood curdling cries. The Wabbit turned and as he expected, he saw a host of Agents of Rabit. But there was something different about them.  Their old marching stance had gone and they were more agile. They could duck and dive and cruel spikes telescoped from their paws. "Run!" shouted the Wabbit. But everyone was running anyway. "Didn’t this happen before?" shouted  Skratch. "Yes!" yelled Lapinette, "it’s quite a regular thing." "Then what happened?" yelled Skratch. "We led them into a trap," said Lapinette, "and the Wabbit was waiting." Skratch looked at the Wabbit and his face fell. "Well he’s not waiting this time," he said. The Wabbit looked up. "Where’s my back up?" he shouted and he shook a paw at an empty blue sky. "Are you certain Command understood your request?" roared Puma. "Certainty is in short supply," gasped the Wabbit. He quickened his pace and had a think. "I know what," he muttered. "We’ll run for the old railway!" "Didn’t we do that before?" asked Skratch. "We did," said the Wabbit. "So what happened?" replied Skratch. "Lapinette rescued us by helicopter," said the Wabbit. They all looked at Lapinette. She shrugged and made a whirling motion with her ears. "It’ll have to do," sighed the Wabbit.
at June 26, 2013