6. The Wabbit poses for a Photograph 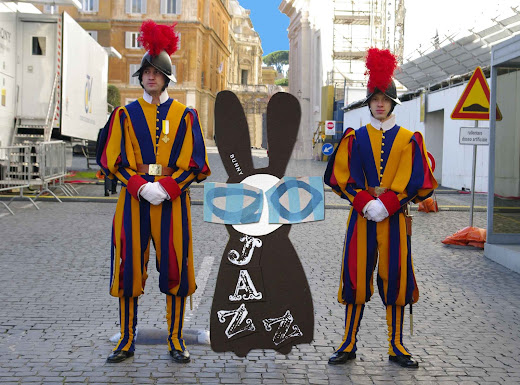 The Wabbit hopped quickly around Rome on Christmas Day and he took a circuitous route to see if he could find the Agents of Rabit. But he saw no-one and speculated that even his enemies might have a day off sometimes. So he crossed the River Tiber and was taking a short cut through St Peter's Square when he heard a friendly voice. "Commander, Sir. Do come and have your photograph taken," said a Swiss Guard dressed in a most colourful uniform. "I don't mind if I do," said the Wabbit and he hopped between two soldiers and posed. "Have you seen any Agents of Rabit?" he asked. "What do they look like?" asked a Guard. "Oh you'd know them if you saw them," replied the Wabbit, "they're very dark and have long pointy ears and horrible gnashing teeth." "We do see some funny things," said a Guard. "We'll keep a look out," said the other. "And if we see them what shall we do?" asked the first Guard. "On no account approach them," said the Wabbit, "they are armed and dangerous." "So are we," said the second Guard and they all laughed heartily. "Well, have a good Christmas," said the Wabbit. "You too!" said the Guards in unison, "but where shall we send your pictures?" "Don't worry, I'll be back," said the Wabbit. "Can we be of any further assistance, Commander?" asked a Guard. "Do you still use Heckler and Koch MP5s?" asked the Wabbit. "Hardly ever at Christmas." said the Guard. "My I order one of your coats of many colours?" said the Wabbit. "You need to speak to the boss," said the Guard firmly.
at December 25, 2011