2. The Wabbit and the Book Proposal 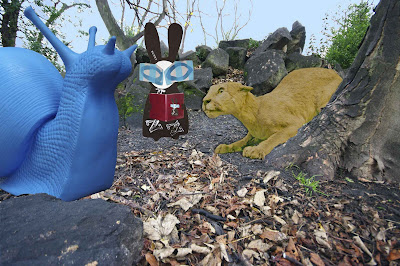 The Wabbit saw Snail approaching and he thought that perhaps his Secret Garden wasn't so secret after all. "We’re writing a book about all of us," said the Wabbit. "Lovely," said Snail and waved his antennae. "Will it have pictures of us and our conversations?" he asked gleefully. "Of course," said the Wabbit. "It wouldn’t be much of a book without pictures and conversations." " What publisher will we approach?" said Snail. "Lawrence and Wishart," said Puma immediately, as if none other would do. "First things first," said the Wabbit. "We've only just started." The Wabbit hopped up and down for quite a while and thought. "We’ll put all our adventures in and every so often, we’ll stop for dinner and make jokes," he announced. "Food, right now?" asked Snail with enthusiasm. "No, in the book, we finish an adventure and then stop and eat - in the book," said the Wabbit. "So that readers will also stop and be critical," said Puma. "What about the readers, who will they be?" asked Snail. "All sorts," said the Wabbit. "We should aim for popular appeal." Puma growled for some time and paced around a tree. "We must be more targeted and advertise in underground stations," he said. Both Snail and the Wabbit turned and looked at Puma with astonishment. "Why the Metro?" asked the Wabbit. "There's nothing to do and travellers read anything while they're waiting," said Puma. "You're in charge of marketing," said the Wabbit.
at December 08, 2011