7. The Wabbit and the Tourists 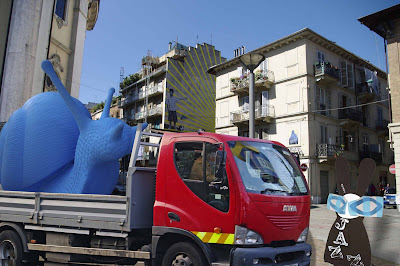 The Wabbit looked up to see Big Blue Snail arrive in the back of a truck. "I have hitched a lift with these kind strangers, who are taking me to Rome," said Snail. "Pleased to meet you," said the Wabbit, "where did you all get together?" "The Big Blue Bullhorn was blocking the road. It was easier to put him in the back," said the driver's mate. The Wabbit knew that snails were called bullhorns in Cornwall and realising that the strangers were a long way from home, he asked them if they needed any assistance. "Thank you! That would be nice, Luvver," said the driver's mate, "it's backsyfore round here. I'm boggled." "That's because in these parts, you're emmets," said the Wabbit with a grin. The driver and his mate chortled mightily." I suppose we are at that," they laughed. "We're heading to the Vatican for the Big Christmas Blessing," said the driver. "Then you are pilgrims," smiled the Wabbit and he rummaged in his fur and gave him several business cards from the Pontiff's Restaurant. "They may even serve you Cornish Pasta," he said with a wicked grin. The drivers' mouths dropped open in astonishment." "Snail gets off at Via San Silverio Market," advised the Wabbit. "Can you point us in the right direction?" said the driver. "What don't you ask the Big Football Boy?" said the Wabbit. "He's always right," said Snail. The driver looked out of the window. "Which way to Rome?" he shouted to the Big Football Boy on the wall. "It's over there!" yelled the boy. "Exactly," said the Wabbit.
[emmets: tourists (derogatory). backsyfore: wrong way round. Cornwall dialect.]
at December 14, 2011