The Wabbit and SPQR 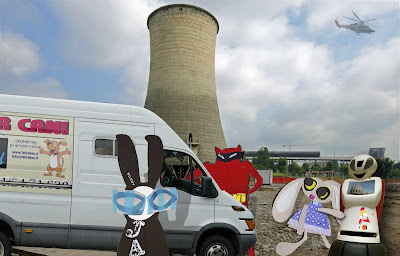 "I'm so pleased to be coming with you to Rome," said Robot as the Wabbit hopped round Skratch’s van. "You're one of us now," said the Wabbit, "of course you come with us!" "I'm going to see my favourite football team," said Robot. Everyone stared in amazement. "What team?" enquired the Wabbit with interest. "SPQR," said Robot. There was a surprised tittering but the Wabbit didn't turn a single hair. "Soccer Playing Quadruped Robots?" he asked. Now it was everyone else's turn to stare at the Wabbit, who merely grinned. "We're expecting Heart of Midlothian Football Club for a friendly match," said Robot. The Wabbit's fur stood on end. "No such thing," he stated categorically. "Will they give us a kicking?" asked Robot. "Not if you deliver to them a kicking first," said the Wabbit. "Mo' te gonfio!" shouted Robot, who then swayed from side to side, making klaxon sounds. "Wabbit, have you been tuning Robot's circuitry again?" said Lapinette sternly. The Wabbit shrugged. "Not guilty," he said and kicked the ground playfully. Everyone flinched as a stone ricocheted around the building site in a trajectory that narrowly avoided the Wabbit himself. "We're being watched," said Skratch abruptly. The Wabbit flicked his eyes to the sky. "Normal paranoia," he muttered and he had a think. "Is Franco taking the jeep?" he said to Lapinette. ""He's on his way," she said. "Can you get him on the blower?" asked the Wabbit.

Mo' te gonfio : "I'll beat you until you're swollen." A slogan of Roma FC.