5, The Wabbit and the Radio Promotion 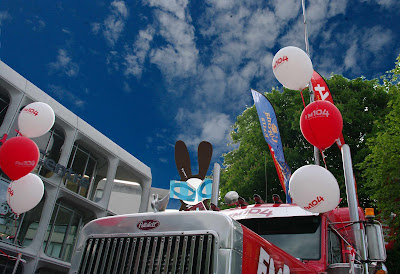 The Wabbit was inspecting a serviceable vehicle when he noticed it was a mobile radio station. "Never miss a chance for promotion," he thought and he hopped up and called to the Disc Jockey inside. "Will you help promote our book?" he shouted. A window opened and the DJ looked out at the Wabbit. "What's the book about Wabbit?" "It features our amazing adventures!" said the Wabbit. "Is it funny?" said the DJ, who was already chuckling at the thought. "It's more than amusing." said the Wabbit. "But does it have jokes?" asked the DJ. "We are always joking and joshing," said the Wabbit, "but in an ironic way that suits our devil-may-care characters." "Sounds perfect!" smiled the DJ. He leaned towards the microphone and chortling the while, urged his listeners to watch out for the release of the book. "Can I play you a request?" tittered the DJ. The Wabbit suggested the DJ choose a song by Frank Zappa. "I don't think we have many," laughed the DJ. "Oh wait, here's one from his Sheik Yerbouti album." "No, no." said the Wabbit as his fur stood on end. "Perhaps something else," he said and, in a firm voice, he twice insisted that he had changed his mind. "Never a bother, I'll just play it," said the DJ. The Wabbit knew what the DJ was going to play and he knew it was a very, very rude song. So he gritted his teeth and hopped away as fast as he could. But he couldn't resist looking over his shoulder and he saw the DJ nodding his head and singing along. "Lapinette must never hear of this," murmured the Wabbit.
[Bobby Brown Goes Down, Sheik Yerbouti. Frank Zappa. 1979]
at December 11, 2011