3. The Wabbit meets his friends in a Jiffy 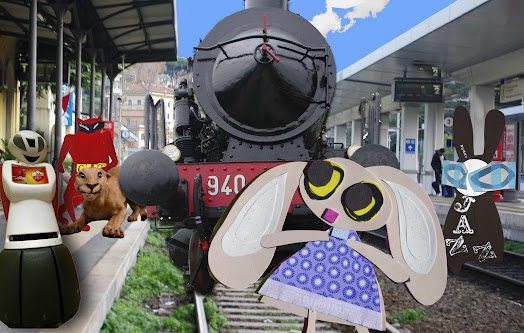 The friends gathered at San Pietro Railway Station to meet Puma, as Thunder the Steam Train arrived. Lapinette was so excited she hopped quickly across the rails to greet everyone. “Welcome to Rome,” she cried, and stretched out her paws. “Somehow, Robot and I managed to arrive at the same time,” said Skratch the Cat Burglar with glee. “My train journey was most entertaining,” said Puma, “We raised several hundred euro for children with special needs.” Lapinette clapped her paws in delight and noticed that Robot was also eager to recount their adventures. “Skratch drove me past the Roma FC football stadium,” said Robot to Lapinette with enthusiasm. “I saw the most famous Francesco Totti arriving and he waved to me!” By this time the Wabbit was beginning to feel quite left out. “Hello,” he shouted from across the track. “Are you all feeling hungry?” “Quite peckish,” said Skratch. “Now that reminds me,” said the Wabbit, “where’s Snail and Franco?” “Snail’s  hitch hiking lift broke down and Franco stopped to help them make running repairs,” said Skratch, “they’ll be along in a jiffy.” “What is a jiffy?” asked the Wabbit, “I thought it was some kind of mail bag." “These days it means ‘in a very short time’ and is a unit of measurement in quantum physics,” pronounced Skratch, “but it used to be the word for lightning in the ancient language of thieves.”  Skratch grinned and loped up the platform to hug the Wabbit, who then looked rather embarrassed. “But what of our enemies, the hated Agents of Rabit?” asked Puma. “Oh, I’m sure they’ll be here in a jiffy,” said the Wabbit.