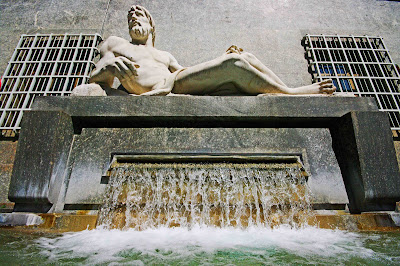 The weather had improved by the time the Wabbit found his contact. He had only had to lope after the bus. When he reached Porta Nuova station, he knew where he was. The Wabbit hopped through familiar territory until he reached the Piazza San Carlo. "This is the time, this is the place, this is the fellow," murmured the Wabbit. He put his front paws on the wall and looked right up. The statue moved and spoke. "You the Wabbit?" " None other, " said the Wabbit. "You could use a drink," said the statue. "Do I look like I could use a drink," said the Wabbit. "Everyone could use a drink," said the statue. "May as well," said the Wabbit. The Wabbit had a good long drink and was surprised. He was instantly refreshed. The Wabbit patted his mouth with his paws. "You got further instructions," he said. It was a question but it came out like a statement. "Everyone needs further instructions," said the statue. The Wabbit thought the statue was a bit of a wise guy, and an old wise guy at that. He decided that he would humour him. "I gotta steer from Turbina, said you had the lowdown." Sure" said the statue "I'm a regular 411." This was lost on the Wabbit, but he ploughed on. "I'm supposed to see some guy." "You gotta see Moloch down at the Mole. He the main man. Importantly important." The Wabbit was ruffled. "That's my line," he murmured to himself. "Be seeing you," he said out loud and suddenly jumped in the water. He shook himself rapidly and water sprayed all around. Ignoring the high pitched yelps from the students on the wall, he hopped casually towards the Mole Antonelliana.
at April 09, 2011