The Wabbit gets help with his Bags 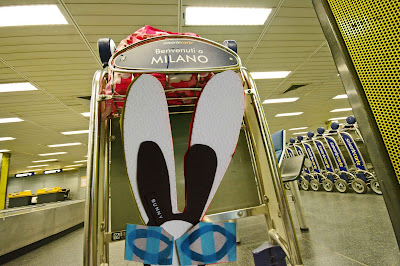 Strictly speaking, the Wabbit did not need a trolley to help carry his bag, even if his bag was heavier than it used to be. He had also acquired a temporary bag from Lapinette and though it was a little flowery for his taste, it was, as the Wabbit always put it, "serviceable". "Where are you going small wabbit?" A friendly voice boomed out from behind the Wabbit's trolley. "The Big Green Plane! said the Wabbit immediately. "I am going to the Big Green Plane too," said the voice. "May I be of any assistance?" "My bag is quite small," said the Wabbit, who was not that keen on being called "small wabbit". He felt it unbecoming for a Wabbit of his considerable merits to be addressed thus. All the same, it was a friendly voice and a friendly offer so he decided to accept. That was just as well for the Wabbit, who then enquired, "May I ask your name?" "My name is Captain Sean of the Big Green Plane. "What a coincidence," said the Wabbit. "Are you familiar with helichoppers? " I'm afraid not," laughed Captain Sean. "But I am familiar with the Airbus 320." The Wabbit was quiet. He didn't think an Airbus sounded half as exciting as an Augusta-Bell AB412, but was far too polite to say anything of the sort. The Captain pushed the Wabbit's bags all the way to the Gate. "That was very nice of you, thank you" said the Wabbit. "Please take one of my new business cards." The Captain didn't seem to think it strange that a wabbit would have a business card. "Thank you," said the Captain. "One never knows when one might need the services of a wabbit such as yourself." You're certainly right there," thought the Wabbit.
at April 27, 2011