The Wabbit revisits an Old Haunt 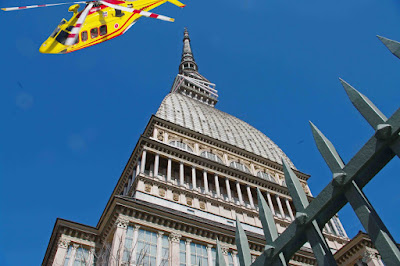 The Wabbit's hop turned in to a stroll. Insofar as it could be said that wabbits can stroll, the Wabbit had worked hard and practiced. Now, in his view, he felt he had perfected the art of the wabbit stroll. The Wabbit turned to look up, since he had been told that if he looked up he couldn't miss the Mole Antonelliana the symbol of Turin. The Wabbit had been known to miss quite large things, so every so often he suddenly looked up and around. "Do you know," mused the Wabbit. "I think I've seen this high place before." And he thought and thought and thought. Then it came to him in an instant and he remembered. "This is where I was, when I was in the Wrong Museum." The Wabbit wondered for a while if it was possible to be in the wrong museum. While he was wondering, a choppedy-choppedy sound took his attention, so he kept staring up for a while and squinted through his special glasses. It wasn't Franco Contadino's helichopper but it did look nice against the blue sky. The Wabbit's thoughts turned to his new attaché. What was Franco doing at this very moment? The Wabbit turned to the street and with some difficulty, hopped through the hundreds of school children. He avoided their many feet and the flashes from their phone cameras and studied the long queue for the museum. "Mmm," said the Wabbit. Then he spotted some senior citizens with special passes. "I also have a special pass," said the Wabbit loudly. So he took it out of his bag and waved it in the air as he attached himself to the silver-haired group. Soon he was in the museum. And he was right at the very front.
at April 12, 2011