The Wabbit has to Jump 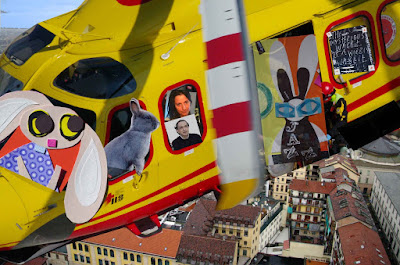 The Wabbit didn't take long to circle the parapet and he was already expecting a helichopper. But he had not expected such a special welcome. He looked out from the railings, astonished. Lovely Lapinette was piloting and his bodyguard, Franco Contadino looked out. Much to the Wabbit's surprise. Sergio Marchionne was there sitting beside Clari Csuk, the Wabbit's designer."Sir" Jump. Sir!" Franco called out to the Wabbit in his usual manner, cutting easily through the din of the engines and the rotor blades. The Wabbit's ears were buffeted by the wind from the blades and he shivered as his fur ruffled all over. He glanced over the rail and it looked a long, long way down, even for a wabbit. "New helichopper, Franco," shouted the Wabbit. He was trying to appear nonchalant but his voice was shaky. "Courtesy of Sergio, Sir! Less turbulence, Sir." Lapinette inched the helichopper in closer. "I can't get in any further than this Wabbit, we'll lose the blades. Just make a big hop." Then he heard a familar voice. "Don't forget your special ears, Wabbit," yelled Clari who had invented them. "Of course," shouted the Wabbit and engaged his ears. They made a soft and curious humming noise, inaudible to most above the sound of the helichopper. But the Wabbit could hear them. "It's funny to think that your ears sound good," thought the Wabbit. "Here I come, ready or not," the Wabbit exclaimed. "I won't even bother to shut my eyes." And he hopped out from the parapet and through the helichopper door with consummate ease. The Wabbit looked out from the door and bad farewell to the Mole as Lapinette took the helichopper back and then up. Then quick as you like the Lovely Lapinettte wheeled it around and the helichopper became a small yellow dot on the horizon.
at April 15, 2011