The Wabbit enters the Presence of Moloch 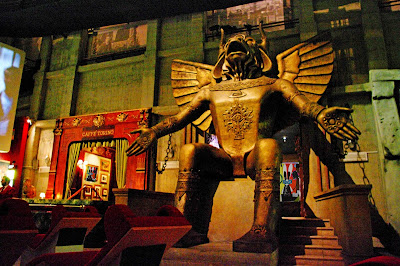 The Wabbit, who was now at the front of everyone, hopped through the entrance and found himself at the feet of Moloch. "That was quick," thought the Wabbit, who had been expecting to make more effort. "I'd better hop around to the front and address him directly." The Wabbit thought he could afford to do this because Moloch looked restrained enough. But he had heard of Moloch and murmured to himself, "Well who hasn't heard of Moloch?" The Wabbit was philosophical about Gods. It was becoming second nature to talk to this and that sort of being. "There appear to be rather many," surmised the Wabbit. "Waaaaaabbit!" Suddenly the God Moloch howled a long Howl. The Wabbit was taken aback but decided to reply in kind. "Moooooloch!" There was no response so the Wabbit carried on. "I have heard of you from Cabiria. I trust you will not require a sacrifice." "Oh I've given all that up," said Moloch. "I quite turned over a new leaf. I have a steady job here and it's a nice little earner." "Well done. Good for you," said the Wabbit. "Good for you," he added. He felt a lot better now that he knew no particular sacrifice was involved. "Draw closer small Wabbit," said Moloch. The Wabbit hopped cautiously forward. "Your mission is complete and transport home is arranged. You will leave from a high place. "The Wabbit wondered whether Moloch was speaking metaphorically, but he looked up high anyway. "Apologies Moloch, I'm a wabbit not a squirrel," he said. "Take the lift, said Moloch. "Silly me," said the Wabbit.
at April 13, 2011