The Wabbbit gets to the High Place 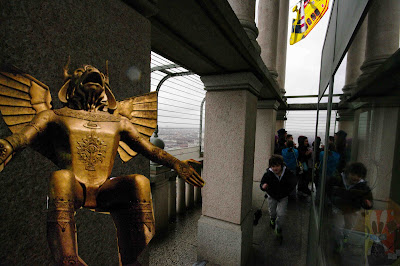 The Wabbit hopped out of the lift and the first thing he saw was Moloch. "That was quick," said the Wabbit. "I'm a God," said Moloch. The Wabbit thought that was fair enough, but neglected to say so. "Of course I had to secure a favour," added Moloch. The Wabbit thought this was best left ignored. "What is next?" The Wabbit put that politely. "You have to go around until you are behind the school children. I will distract them." The Wabbit shot Moloch a warning look. "I will amuse them with one of my many jokes," said Moloch. The Wabbit smiled and glanced over Moloch's shoulder at the skyline. He was becoming familiar with the city. Far off he could see Lingotto and he briefly wondered about Sergio and his furry sweater. "Can't you hear anything?" Moloch was insistent. The Wabbit didn't have to prick up his special ears. Now he was acutely aware of the dull choppedy-choppedy of a helichopper. "Let me make sure," said the Wabbit. "Round to the other side, behind the school children. Helichopper waiting?" "I said I'd get you home. Be quick," said Moloch." I'm gone. Be seeing you," said the Wabbit. He put down his ears and hunched his shoulders. Moloch tilted his head back and bellowed. "Baaaambini!" All the children turned and took photographs. The Wabbit sprang round the parapet and as he did he could hear Moloch's voice fading. "A funny thing happened to me when I was in Carthage ... " The Wabbit winced and sprang on.
at April 14, 2011