8. The Wabbit and the Trick of the Light 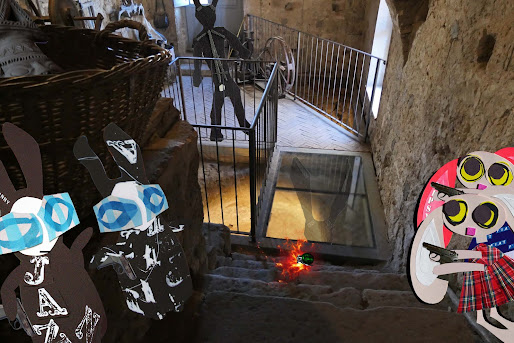 Lapinette tracked them down. With her super hearing she could hear the strange snickering sounds of their incisor teeth. They crept into the building. "What's that? asked the Wabbit. "Trick of the light," replied Wabsworth. Lapinette wasn't impressed. "Concentrate!" They drew their automatics. Rabits began to mount the stairs. One of them emerged from the underground cavern and made his way towards the window. The Wabbit shrugged. "They shouldn't make it so easy." Lapinette snorted. "It's never easy." Tipsy giggled and said something under her breath. The Lion of Judah had insisted on being part of the action and he nestled in large basket. The Wabbit thrust his paw deep in his fur. Lapinette hissed. "Wabbit, this building is a tourist attraction." The Wabbit grinned. Everyone knew his opinion of tourists. He pulled out a hand grenade. "Time for a New Year Kaboom." Lapinette groaned. "We can take a few Agents of Rabit with our automatics." The Wabbit shook his head. "Where's the stun in that? On the ground everyone." He crouched, pinned down his ears and threw the device towards the cavern. It spluttered. Nothing happened. The Wabbit held up a paw for what seemed like an age. There was an enormous crack. Agents dropped like stones. The Wabbit dusted himself off and waved his paws. "See - no damage." Then from the distance they heard the rumbling of stonework and what sounded like an avalanche. The Wabbit shrugged again. "Not much anyway."