2. The Wabbit and the St Peter's Express 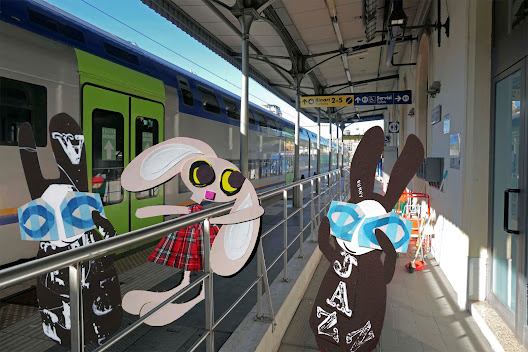 The Wabbit got to the station just in time to meet Wabsworth and Lapinette. The train was 30 seconds early," smiled Wabsworth. "I will write a letter of complaint." The Wabbit knew Wabsworth well and he knew that he would. Lapinette bounced in the air and flung her paws wide. "What a nice day. You wouldn't think it was the dead of winter." The Wabbit stretched out his paws. "That's Rome for you!" He waited to hear news of his new mission, but no-one was saying. Wabsworth and Lovely Lapinette hopped on. The Wabbit thought that the purpose of the railings was to make you hop a long way. Usually, he ducked underneath. But he shrugged and hopped along with them. "Where are we going?" he asked. "Shall we take the bus?" said Lapinette. She had answered a question with a question and the Wabbit groaned inwardly. "You can see more from the bus," observed Wabsworth. "We'll get the 64 and sit behind the bus driver," said the Wabbit. "So that we can talk behind his back?" suggested Lapinette. She knew all the Wabbit's bad jokes. Wabsworth laughed like a drain because he hadn't heard it. The Wabbit could wait no longer. "So what's this mission then?" Wabsworth grinned and shook his head. Lapinette giggled. "A dark mission with dark spaces. Concealed corners and dramatic angles." The Wabbit groaned again. He'd been thinking of smooth silky beaches and mirror-like waters. "Sounds like a film," he said. "All our missions are a bit like a film," said Wabsworth. "What film is it a bit like?" asked the Wabbit. "No Time to Binky," grinned Lapinette.