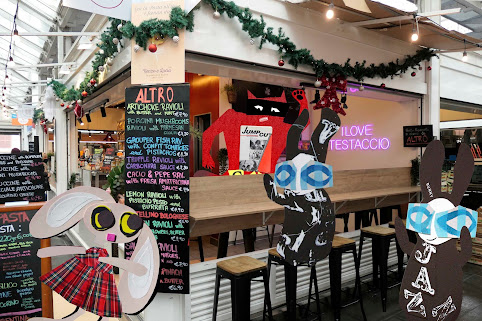 They all met in Testaccio Market. For once, Skratch was on time, since he was helping out a pal. Lapinette was late and as she headed round the corner, they greeted her with a loud Hello! "It's nice to make an entrance," she laughed. Skratch winked. "Since it is you that's late, you have to say what kind of adventure you were in." Lapinette hugged the Wabbit then leaped on to a bar stool. "I'd say it was a medieval kind of adventure. Historical drama if you like." The Wabbit also jumped on a stool. "Without the history." Wabsworth grinned. "Without anything. All texts refer to other texts. All stories have been told." Skratch was waiting to pounce. "The story has been told so many times. it hardly has any meaning left." "Umberto Eco," nodded Lapinette. They all nodded back. Soon everyone in Testaccio market was nodding. "The name of the Agents are almost non-existent and destroyed," muttered the Wabbit. "The story has been told and now only itself is left behind. Everything else disappears," said Wabsworth. "Into the void," added Lapinette. The Wabbit considered this for a whole minute. "Talking of voids, we were supposed to meet for a drink." Skratch meaowed. "I'll get everyone a Prosecco and since I'm in charge of the bar, it's on the house." The Wabbit leaned back. "The house always wins?" Lapinette grabbed a Prosecco. "Mostly," she smiled. "But most of your money disappears."
at January 09, 2023