5. The Wabbit and the Cellar Fumes 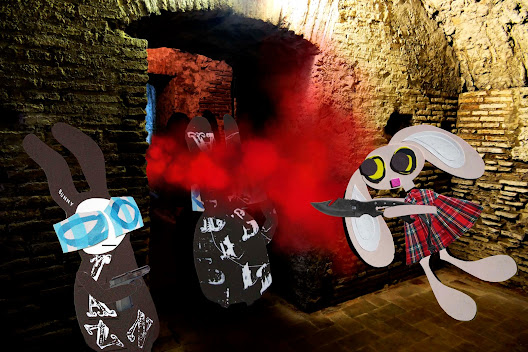 The snakes had melted away but their hissing remained. "Go no further, go no further."  The Wabbit paused but urged Wabsworth on. Wabsworth was an android and could withstand substantial blasts, toxicity, and most weaponry. Lapinette took out her edged weapon. It was versatile and also quiet. The Wabbit hugged his automatic although he knew it had seen better days. "Must upgrade," he muttered to himself. The safety catch fell completely off. He shrugged. Wabsworth walked a little deeper into the cellar towards a blue light. His fur detected something, but it was too late. He was enveloped in a red fog. He pretended to cough. "Wabsworth?" The Wabbit and Lapinette were both concerned. "Just vapour and hardly worth mentioning," said Wabsworth. It was then that they heard a wail. It came from the direction of the blue light. With a wave of his paws, Wabsworth cleared the red vapour. "What's with the wailing?" Lapinette sheathed her edged weapon. "It sounds like a Gashadokuro." The Wabbit looked with curiosity. Lapinette explained. "It's a Skeletron of the undead. It roams the night." The Wabbit chuckled. "What other time." The wailing gave way to rattling. "That's its bones," shrugged Lapinette. Wabsworth retreated a bit. "It's a gathering of bones. In this case it must be catacomb bones. Plenty around." The Wabbit tucked his automatic in his fur. "It must be big," said Lapinette. "Fifteen times the size of a person," added Wabsworth. "Good thing we're only a skeleton crew." quipped the Wabbit.