7. The Wabbit and the Green Death Skull. 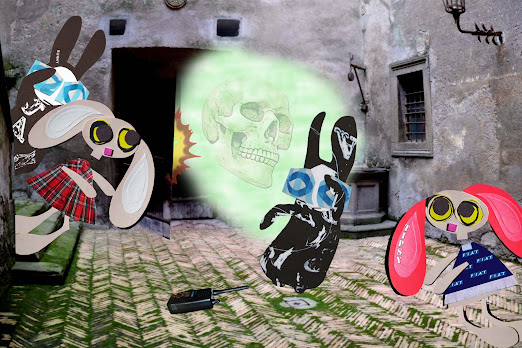 The rest of the team arrived just as a second explosion blew Wabsworth off his feet. Wabsworth reeled around. All his circuits were in danger of being fried. "It's the, it's the.." The words wouldn't come. Lapinette shot across the courtyard. The Wabbit came birling down the stairs. Tipsy knew what was going on and she dived for the radio. "He must have sent something on their frequency." Wabsworth tried to explain but he was still in a daze. Clouds swirled around them and from the midst a skull emerged and bore down. Tipsy yelled, "Death skull! Death skull!" Lapinette tried to grab the radio. In a trice both she and Tipsy had it. They looked at each other and at the radio. But the Wabbit had other ideas. He wrested it away and threw it over a wall. The boom shattered windows for a block. Green fumes were everywhere. The skull turned to look at the Wabbit. "Next time," he hissed, "you're mine." Then he faded. "Phew," breathed the Wabbit. He leaned against the wall and turned to Wabsworth. "Are you all right?" Wabsworth ran a diagnostic. "All appears to be optimal." Lapinette spoke to Tipsy. "How did you know?" Tipsy grinned. "I saw it in the movies. It represents death and power. Also it looked mean." The Wabbit breathed a sigh of relief. "But what's it got to do with the Agents of Rabit?" Lapinette shook her head. "We're going to find out. They haven't finished yet."
[Skull by Squarefrog]
at December 30, 2022