1. The Wabbit and the Quiet Spot 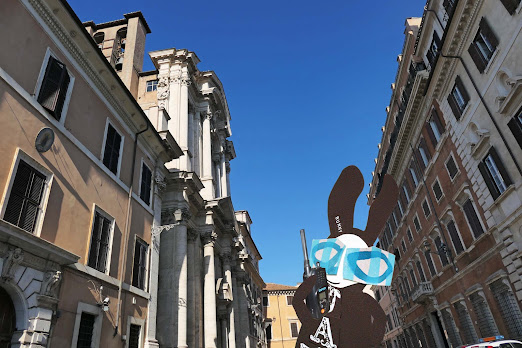 The Wabbit found what he was looking for - a quiet spot. That wasn't so easy in Rome, where tourists flocked hither and thither. He'd been studying faces. No-one seemed to be enjoying themselves. Too much flocking, not enough rocking. He grinned at his own joke and stopped to take in the view. Despite the increase in tourists, it wasn't hard to get off the beaten track. He suddenly felt bored, so he plunged his paw into his fur and took out his radio. He jabbed at it. It was dead. He jabbed again. It came on at full volume and his quiet spot was quiet no longer. He shook it into silence and dialed Lapinette's channel. "Wabbit here, come in Lapinette." The radio whined and crackled. "Lapinette. What's your 20?" The Wabbit looked around because he hadn't a clue. "I'm near a big church." Lapinette giggled. "This is Rome, Wabbit. You could be anywhere." The Wabbit smiled and tried to get a fix on  his location. "Not far from Largo de Torre Argentina." Lapinette was used to vague responses. "So what's up?" The radio crackled.  "I wondered if there are any new orders." He began to hop. "Yes, but no rush," answered Lapinette, "Take your time." She could hear the sound of his feet padding over cobbles. "OK. Out," said the Wabbit. He made for Vittorio Emmanuelle II and the bus station, but he took the back route through Campo de Fiori. "I might see something for Lapinette," he thought.