3. The Wabbit and the Lonely Catacombs 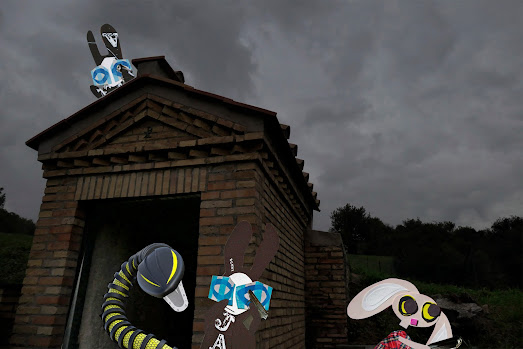 At a little known destination just out of town lay an entrance to very old catacombs. Over many hundreds of years, different local municipalities of different kinds tried to tidy it up but it resisted all attempts to sanitise it. No one ever went there now except for stray dogs, and even then, they had to be brave.  An area had been laid out for visitors but the few picnic tables there were, lay abandoned on their side. Night began to fall over the site. Soon it would be pitch black. "This is spooky," said the Wabbit. He leaned against the brick enclosure and took his gun out of his fur. Wabsworth climbed on top of the building and waved his automatic around. Lapinette stood with her back to everybody. She was ready for anything that might come her way. The doorway lay open - usually it was locked with three massive padlocks. The Wabbit looked at the stairway and ground his twenty eight teeth. Without warning a massive head coiled round the doorway and looked the Wabbit straight in the eye. "Hiss, hiss!" it said. Its mouth gaped open. "Hiss hiss!" responded the Wabbit. The snake reared up. "This isn't a competition. Who are you?" Lapinette turned round to face the creature. Wabsworth trained his automatic on the snake. The Wabbit shrugged. "Catacomb patrol," he said. "Have all shelves, bones, artefacts and relics ready for inspection." "Oh," said the snake. "We're not ready for visitors. It's a bit dusty in there." Lapinette hopped forward. "Girls dust wanna have fun." Wabsworth called from the roof. "So we'll take you dust the way you are."
[Snake by Pete Linforth, Digital Artist at Pixabay]
at January 19, 2023