1. The Wabbit and his Christmas Orders 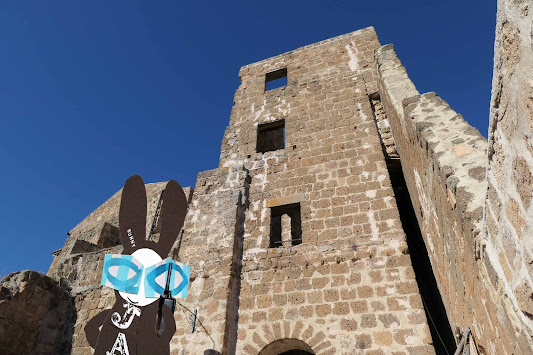 The Wabbit ambled through a village in Vescia. He liked it there because it was abandoned and there was a story he'd heard from locals. Years before and weakened by earthquakes, the village started to crumble and collapse. Yet the people who lived there refused to leave - despite much encouragement and inducements. So the authorities took an unusual decision. They decided to bomb the village. The Wabbit imagined planes coming in and he shook as he visualised bomb doors opening to deliver the payload. He shook his head. He would have used his fabulous Wabtech engineering to fashion a support structure. Then he thought of the cost. He plucked his radio from his fur. "Wabbit to base, come in Lapinette." The radio crackled for rather longer than expected. "Lapinette. Receiving you loud and clear. What's your 20?" The Wabbit grinned. "I'm somewhere in Vescia." He liked to be mysterious. The radio hissed again. "Do bring back some nice cheese." The Wabbit grinned again. "Wilco. I'm really calling to instruct the team to head to Rome." Lapinette's laughter tingled across the ether. "They're already here, Wabbit." The Wabbit grunted. "Including your personal guard?" "Tipsy is exploring new stores," replied Lapinette. The Wabbit knew exactly the shop Tipsy was exploring. "The World of Drink?" The radio hissed and crackled. The Wabbit spoke again. "I hear the Agents of Rabit have a paw hold here, but I've seen neither hide nor hare of them." Lapinette had little tolerance for the Wabbit's bad jokes. Her shrug was audible, even over the radio. "Lapinette out."