3. The Wabbit and The Lion of Judah 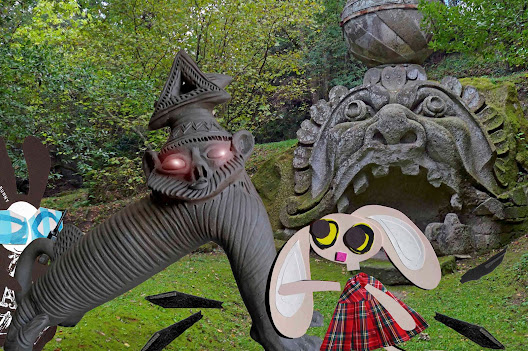 Lapinette and the Wabbit landed to look at the ears, but they were in for several surprises. In a bleak windswept place, there was a lion and a deep cave. The cave was shaped like a lion and looked like it might swallow anyone who entered. A lion with flashing eyes stood guard outside the cave. "I am the Lion of Judah," said the Lion, "And this is my cave, in which I keep the seven seals." The Wabbit gently touched the lion's tail and pointed to the ears. "What about the ears?" The Lion turned and glared at the Wabbit. "These are the ears of the strange creatures who haunt me. I munch them off that they may not hear the coming." Lapinette hopped back. "That's harsh but fair," she said. "Yes, said the Lion, "and they're rather savoury." Lapinette shuddered, but the Wabbit was already thinking about recruiting him. "Would you consider a side mission?" The Lion of Judah shook his head so much his crown was in danger of falling off. "But you retreat before nothing," said the Wabbit. "You're right," nodded the Lion. "Then I propose you come with us," said the Wabbit, "We'll get these Sons of Satan together." "The Agents are the Sons of Satan?" queried Lapinette. "I promoted them," replied the Wabbit. The Lion looked around. "What about my Lion's cave?" The Wabbit fished for his radio. "I'll place an armed guard on it. No-one will get the seals." The radio crackled as the Wabbit issued orders to his 400 Rabbits. "Here comes the King," muttered the Lion.
at December 19, 2022