4. The Wabbit and the Graffiti on the Wall 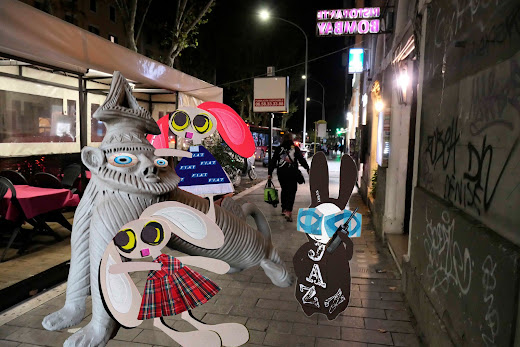 Picking up Tipsy at the station, they all made their way to King of Rome by underground. They pretended the Lion of Judah was a large dog and no-one took any notice. Lapinette was anxious to get where she was going, and she forged ahead. But the Lion stopped to look at Graffiti on the walls. "It looks like Aramaic," he said. "It a Kingly welcome from the King of Rome to the King of Judah." Tipsy glanced at it. "Who's Denise?" she asked. "Queen of Sheba," answered Lapinette, who was anxious to press on to whatever destination she had in mind. "She has my ring," said the Lion. "Actually, Bob Marley has it now," announced the Wabbit. "So it's six feet under," announced Tipsy. "It's pretty but it's only a ring," said the Lion. He turned and padded up the street. Tipsy jogged along on his back, quiet for once, respectful even. She leant down to his mane and whispered. "What's all this about the Lion and the Lamb?" The Lion let out an enormous bellow that turned the heads of ordinary Romans in the street. "I am both. As confirmed in Revelations." The Wabbit paused and spoke into his radio. "Exodus." It was the code for the troops to gather. The radio crackled with confirmations. The Wabbit grinned. "Just time for a Christmas drink. There's a bar near here that sells Whitbread." Tipsy cheered and cheered. The Lion of Judah stopped. "My eyes shall be red with wine!" Lapinette gave in. "Just the one then."
at December 23, 2022