2. The Wabbit and the Noisy Pick up 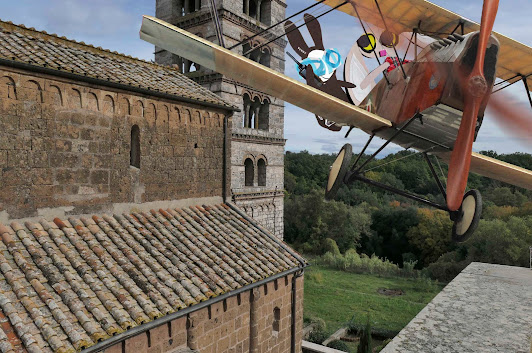 The Wabbit didn't really know Lapinette was on her way, but he figured it out. Anyway he could hear the engines of Susan the Biplane coming for a long way off. He climbed to the top of a tower and jumped onto Susan's wing. "We keep doing this," smiled Lapinette. "We must like it," replied the Wabbit. "When you've quite finished," said Susan, I'd appreciate directions." The Wabbit clambered aboard. "Just fly round and keep a look out for the Agents of Rabit. You can tell them by their ears." Susan banked steeply and circled. Her engines roared. "I didn't say make them deaf," said the Wabbit. It was a pleasant day. The sky was blue. The odd cloud scuffed across the it. "Nice spot," said Lapinette. The Wabbit grinned. "Plenty of nice spots round here." They sped across the horizon. "What are you expecting?" said Lapinette. The Wabbit wrinkled his nose. "I heard word that they planned a surprise attack." Susan's engine growled. "They always surprise us at Christmas!" The Wabbit shrugged. "They're creatures of habit." He looked down. "I saw one there." Lapinette looked too. "No it's just a pair of hedge clippers." Susan dived towards the object. "You can't be too careful." Lapinette laughed. "Why beat about the bush?" As they got closer, the hedge clippers swam into focus. They could see they weren't clippers but pairs of detached ears. Lots of them. "Ear ear," said the Wabbit. Susan's engines growled again. "I'd better land before there are any more bad jokes." "Don't worry," said the Wabbit, "they can't hear us."