6. Wabsworth and the Agents' Radio 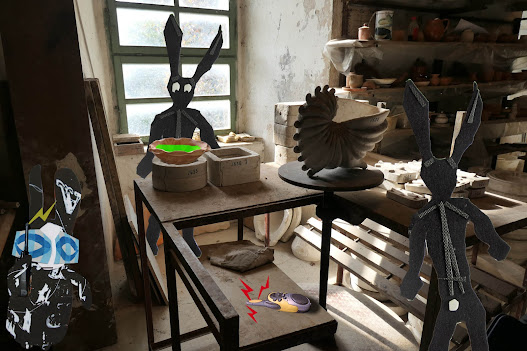 Wabsworth crouched in a corner. Two Agents were doing something in one of the workshops, but it was hard to see what it was. He heard them talking. "This will fix him," said one. "For once and for all," said the other. "It will be the best explosive know to rabbits!" One of them laughed. Wabsworth risked taking a look. He could see one Agent heating liquid in a clay pot. "Just do enough and they'll be ready for delivery." The other agent guffawed. "They'll all be scoffing, him and his friends - and then .." "Kaboom!" said the other. Wabsworth thought of a cunning plan. He'd noticed a radio - a walkie talkie - lying on a wooden bench. It was a repellent shade of yellow and he knew it must belong to the Agents. So he dialed through a number of frequencies. He murmured to himself. "I think this is the right one." He made an attempt and then quickly aborted. It crackled briefly, then cut off. "I thought I told you to switch that off." The Agent in charge was enraged. "It could blow us all to Kingdom Come!" The other agent dived for the radio, but Wabsworth was calling again. Sparks flew from their walkie talkie and reached the strange liquid brewing in the clay pot. Wabsworth was already hopping down the stairs when he heard the explosion. It was a slow build. Little noise at first, then a powerful shock wave knocked him down the rest of the steps. He dusted himself off and wondered whether the Wabbit would be annoyed. He shrugged and said to himself. "Many a slip between pot and lip."