3. The Wabbit & the Ice Mice Installation 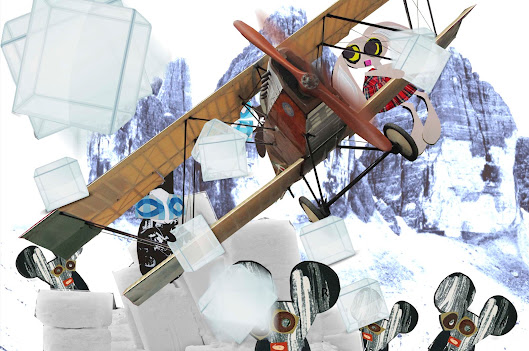 It happened in an instant. They found the Ice Mice and their installation. It was in the shape of a tower and seemed to fulfil a particular purpose. Susan flew back and forth chopping their ice blocks to pieces. Then she activated her air conditioning unit and added a few more ice blocks for good measure. Lapinette and Wabsworth chucked ice on the Ice Mice without mercy and watched them turn tail and run. "That was too easy," commented the Wabbit, "but what the binky were they doing?" Lapinette scrunched up her eyes. "I think it was some kind of reverse air conditioning. It makes ice blocks and leaves the rest of the land ... just desert." Wabsworth was thinking too. "Evapotranspiration?" The Wabbit brought Susan round. "Something of the sort. And the possible end of the line for Turin." Susan wheeled about again in a corkscrew fashion. "Were not going to allow it. Let's hunt the rest of them down!" The three squeezed into a cockpit that was only big enough for one. The Wabbit boosted the heating. "Do a recce of the Alps, Susan," he murmured. "Right away Sir," said Susan, "What music would you like?" Lapinette jumped in because she somewhat disapproved of Susan's affection for the Wabbit. "It's cold outside," she suggested. "OK fine, just another drink then," joked the Wabbit. He delved into his fur, took out a hip flask and poured whisky into three stainless steel glasses. "That took a lot of convincing," laughed Lapinette.