5. The Wabbit and the Unnamed Desert 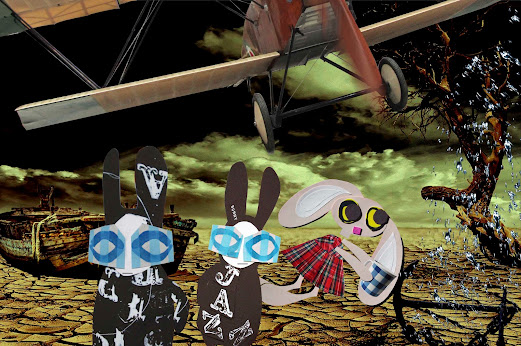 The team had nicknamed the place Chuck a Luck, but they weren't having much luck at all. The further they trekked, the bleaker it became. The ground beneath their feet was super parched. The sky turned from red to black. The few clouds there were, refused to give up their payload. No water was to be had, except for weak rainfall around an old dead tree. It was Lapinette that spotted it. She took a cup from her frock and held it out to the meagre shower that surrounded the branches. "Yeugh," she yelled. It was brackish and undrinkable. The Wabbit felt in his fur for a water flask, but there was none. Susan the Biplane flew overhead, dead slow to conserve fuel. They could have travelled with Susan but the Wabbit insisted he could see more from the ground. He began to regret it. "This was once a sea," he said. Everyone had noticed the abandoned barge and they nodded. "Climate change," said Wabsworth. "Maybe this is our future," remarked the Wabbit. Lapinette began to sing again, and everyone slapped a paw to their heads. "After three days in the sun. I was looking at a dry seabed. The story it told of a sea that once flowed. Made me sad it was dead." The Wabbit stared at Lapinette. "What's with all the singing?" Lapinette smiled a strange smile. "Passes the time when we're looking for Ice Mice." Wabsworth laughed. "We'll sing them into submission." They trudged on. "I'm imagining a glass of Prosecco," said the Wabbit. "Imagine one for me too," said Lapinette.