2. The Wabbit and the Deserted Desert 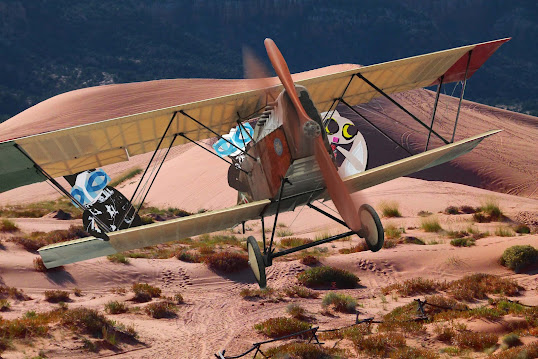 The throb of a biplane's engines cut into the summer air and before long the Wabbit and Lapinette took off in Susan and flew north. Susan had brought Wabsworth along for his android knowledge - since he'd been forever complaining about not appearing in an adventure. But as they flew further things began to get drier. By the time they were over Piedmont, the landscape was unrecognisable. The air was like a thousand hairdryers. Susan skimmed the desert sand. Only a few scrubby plants remained in what had been lush fields and pasture. "Can your sensors detect any water, Susan?" asked the Wabbit. "Hardly any," said Susan. Lapinette had sharper eyes than most and she looked out. "Over there!" "Over where? asked the Wabbit. He was just being annoying. She pointed. "Blind as a bat," she muttered under her breath. The Wabbit grinned and twisted the joystick. Susan wheeled to port. "I saw a camel over there!" joked the Wabbit. "As it happens, I did see a camel over there," said Lapinette. Wabsworth chimed in "It's probably got the hump." "One hump or two?" said Susan. They laughed and laughed. But the landscape became progressively drier. "Where's that water?" asked the Wabbit. "Evaporating as we speak," said Lapinette. "No visual bearings now," said Susan, "just desert." The Wabbit gripped the joystick between his paws and flailed his paws. "I'd like a nice dessert." Wabsworth looked down. The arid air was bad for his fur. "My sense of humour sub routine has deserted me." Lapinette held her paw aloft. "I see a volume of ice and think I can see the Ice Mice." Wabsworth scowled. "I hate these pesky rodents."
[Background picture:  Art Tower ]
at July 28, 2022