6. The Wabbit and the Toxic Trouble 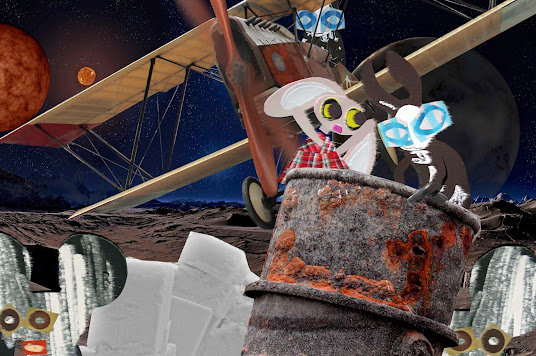 Night fell. The desert gave way to a barren landscape. They could make out alien planets in the sky - or were they suns? There was no way of knowing. The team were on the Ice Mice before they knew it. Massive ears could be seen as they worked on one of their installations - the usual assembly of giant ice cubes. But there was a difference. A giant canister protruded from the dusty planet surface. "Let's go," yelled the Wabbit. He jumped from Susan's wing and so did Lapinette. Together they inspected the canister. "Toxic waste," murmured the Wabbit. "How can you tell?" asked Lapinette. The Wabbit grimaced. "It always comes in rusty containers like this. Destined for earth no doubt." They saw two more Ice Mice emerge from beneath the container and run for their lives. "Technicians," said the Wabbit. Lapinette agreed "They have notebooks." Susan circled overhead with Wabsworth. The Wabbit made a sign for Wabsworth to release the grappling hook. "What's your plan?" queried Lapinette. "Get it off-planet," said the Wabbit, "We can't destroy it. It'll hurl crap everywhere." Lapinette frowned at the Wabbit's use of bad language, but decided to let it go. "What about the Ice Mice?" The Wabbit had no idea. "We'll decide later?" He fished in his fur for a package of dynamite and passed it to Lapinette. "You throw it. Keep em busy." Lapinette pitched it as far she could. The Wabbit took brief aim and fired a single shot. There was a distant explosion accompanied by mice-like squeaks. "Fire in the mouse hole," said the Wabbit.
[Background pictures from Pixabay   ]
at August 10, 2022