7. The Wabbit and the Ghastly Waste 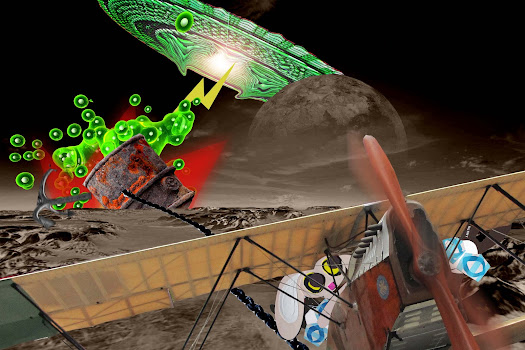 Susan flung a grappling hook at the container, and they were off. But before they cleared the horizon a green ship rose from behind a ghostly moon and fired a single shot. It was a bolt of yellow lightening and it struck the container dead centre. The container glowed red, then exploded. Green toxic waste spilled out, bubbled onto the planet surface and into the reaches of the atmosphere. "Change of plan?" muttered the Wabbit. "They'd rather pollute than purify," said Lapinette. "Not much we can do at this stage," shrugged Wabsworth. "Interstellar Mode," snapped Lapinette. Susan didn't wait for an instant. With a roar of her propellers she vanished into a single white light. Space seemed different. Quiet. Eerie. "Not much to look at," said the Wabbit. "In Interstellar Mode, there's no-one to hear you complain," quipped Susan, "How long until we get home?" said the Wabbit. "Since I don't know where we started from, I've no idea," replied Susan. Wabsworth offered a solution. "I made some measurements. We'll be home in time for tea." Lapinette laughed. "None of us drink tea." "I'll do them again," said Wabsworth. He whirred a bit. "Time for Prosecco." Susan chortled. In Interstellar Mode it's hard to tell time." "Must be late then," said the Wabbit. "Or even early," said Lapinette. Susan switched off the drive and the earth swam into view. "Can you see a bar?" asked Lapinette. She wiggled her ears. "Because I can." The Wabbit had a fit of the giggles. "Take us in Susan. It's opening time."