2. The Wabbit and the Spooky Stairs 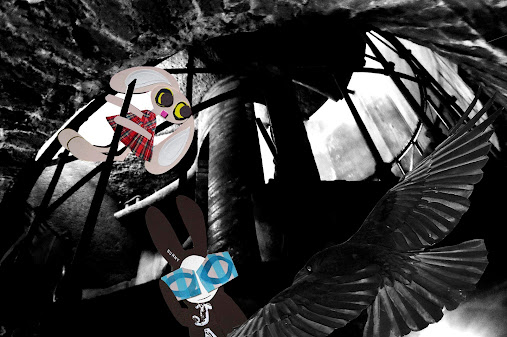 "This is the stairway," said the Raven. "I'd never have known," said the Wabbit. "Look! There's a spook now," said the Raven. The Wabbit shook his head and pointed. "That's Lapinette. I know she can be scary. But she's no ghost." Lapinette floated down in an ethereal kind of way. "Wabbit, I wanted to be sure you weren't getting into any kind of trouble." The Wabbit grinned. "Everyone wants to look after me." The Raven addressed Lapinette. "You look like a funny kind of rabbit. You're sure you're not a spook?" "Some say," responded Lapinette. "I warned the Wabbit not to use these stairs. They're haunted," said the Raven. "Just like in books?" replied Lapinette. "A Raven is like a writing desk," ventured the Wabbit. "Now don't you start," said the Raven, "I've had all I can take of writing desks." The Wabbit looked up above. "Shouldn't we check upstairs?" The Raven snorted. "Of course not. Ghosts are seldom if ever upstairs. they're usually downstairs with the unconscious." Lapinette joined the Wabbit on the landing. "But isn't the object to get downstairs without meeting any ghosts?" "You're as bad as he is," muttered the Raven. He made a series of gurgling croaks. "Please lead the way down the staircase and keep an eye open for spectres." At that moment they heard a haunting cry. It lasted long and sounded chilling. "I'm up for it if you are, Wabbit," said Lapinette. "So many horrid ghosts," shrugged the Wabbit. "How dare they?" said Lapinette. "Words spoken cannot be recalled," croaked the Raven," so think twice before you speak."
at August 31, 2022