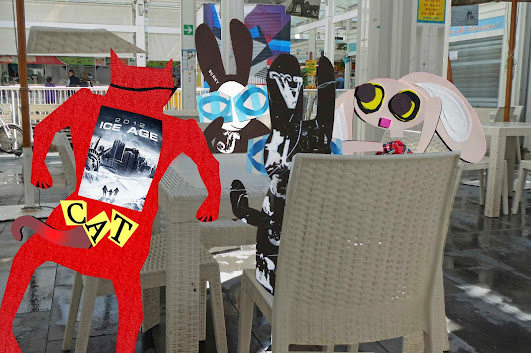 The team gathered early morning at a Caffè in Testaccio Market. There was hardly anyone around. It was a holiday and very few market stalls were open. They grinned at each other and said together, "What was that for a sort of Adventure?" Skratch purred. "It was purportedly an environmental adventure with dire warnings about what was in store for the earth. But it was about something else." Wabsworth raised a paw. "The backdrop was more of a considered awareness of the natural world." Lapinette shook her head. "There was a key duality between environment with a post-apocalyptic flavour, and the question of waste itself." The Wabbit raised a paw in the air. "Real questions about what to do with waste." They contemplated for a second. Skratch was first to break the silence. "Charles Soukup poses an interesting question. He says techno-scopophilia and the voyeuristic portrayal of military technology itself is highly sexualised." Everyone's eyes went large. Lapinette pursed her lips. "There goes the family audience." Wabsworth tried to rescue the conversation. "Soukup also points out that the power of technology can be portrayed as both unwieldy and uncontrollable." The Wabbit threw up both paws. "I'll go with that, Wabsworth. We surely aren't victims of the sexualised scopic gaze." Lapinette smiled sardonically. "We're more art house than grind house." The Wabbit leaned back and looked around. "I fancy a Prosecco. Anyone joining me?" "It's 9 o'clock in the morning," gasped Lapinette. "I love the smell of Prosecco in the morning," said the Wabbit.