3. The Wabbit and Beelzebub Cometh 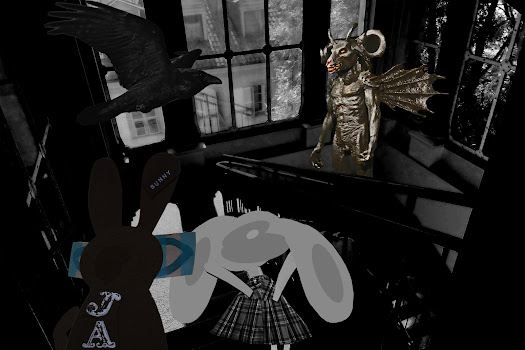 "Ah there he is," said the Raven, "Coming from downstairs exactly as I said." The ghostly apparition moved stolidly forward. "I am Beelzebub!" he said. He took a step forward. "I am Beelzebub." he repeated. "I am cometh. For I am Beelzebub." The Wabbit paused on the stairs. "He reminds me of someone." The Raven had seen him before. "Pass foul fiend, pass." Beelzebub moved forward at a steady pace. He rounded the corner of the stairs and advanced on the Wabbit and Lapinette, one step at a time. And all the while he intoned. "I am Beelzebub, I am cometh." Lapinette's paw gripped the bannister. The Wabbit's held out a steadying paw to Lapinette. Maybe it was for his own safety. He gritted his teeth. Beelzebub faded and passed through the Wabbit as if he were nothing. The Wabbit felt icy cold and then all was gone. Left behind was an acrid sulphurous smell. The Raven chattered and croaked and that was spooky enough. "I told you. The stairs are spooky." The Wabbit turned to Lapinette. "Did you feel that?" Lapinette shivered. "I did." The Wabbit took a step forward. "May as well go on down. Is that all there is?" The Raven cackled. "Not at all. There's much worse to come." "Can you call these spirits from the vastly deep?" asked the Wabbit. "Anyone can," said the Raven. "Can you make dreadful discords too," asked Lapinette. "Aye and chattering pies," said the Raven. The Wabbit's stomach rumbled. "I knew I could smell food," he said.