4. The Wabbit and the Rabid Radiatori 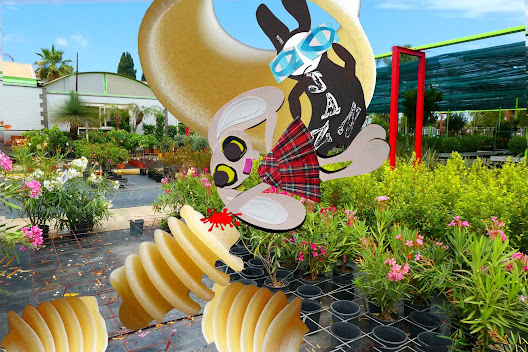 Pacchero stopped over a lovely garden. The Wabbit and Lapinette looked over the edge. "This is Radiatori Land," said Pacchero. Lapinette pointed. "Oh look, there's pasta creatures moving round. They must be little radiators." She was delighted. "They look like slugs," muttered the Wabbit. "Don't be boring," snapped Lapinette. She leaned out further. Pacchero shuddered. He seemed to be having stability problems. "Just contacting computer control," he spluttered. "They'll have me sorted out in an instant." Lapinette and the Wabbit slid down further. Then with a yell Lapinette lost her grip and plunged towards the ground. The Wabbit seized her by the frock. But he was slipping too. A Radiatore jumped at Lapinette's paw and bit it. Blood spurted. "Yaagh that hurt!" shouted Lapinette. She yelled to the Wabbit. "Get me out of here!" The Wabbit still had her frock by the hem and he hung on and pulled it. Pacchero was aghast. "This never happens," he gasped, "We have too many failsafes! You can't get hurt in here." The Wabbit pulled himself back on board with Lapinette's dress bunched around his legs. "Your fails aren't safe enough," he growled. The Radiatore stuttered. "Boy boy boy have have we got got a v v v acation for you you you." The Wabbit groped for his automatic. But Pacchero was ready to take off. Lapinette clambered to her feet and spoke to the Radiatore. "You bit me." The Radiatore jumped up and just missed Lapinette. "I'll bit bit bit you again." "You talk too much," shouted Lapinette. "Make me shut up!" yelled the Radiatore. Pacchero started to spin - and they were gone.
at July 07, 2022