7. The Wabbit and the Big Heat 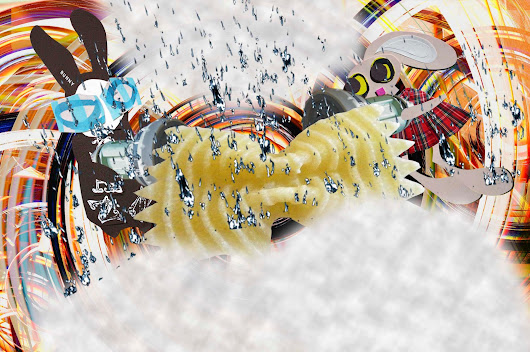 They ran down the tracks of the Control Room until the tunnel exit became a spiral. The Farfalla wasn't going to give up and he charged at the Wabbit and Lapinette. They continued to retreat but the Wabbit grabbed a couple of fire hoses from the wall and tossed one at Lapinette. Then they hosed the farfalla for all they were worth. But the Wabbit had something else in mind. With an industrial heater he kept in his fur he began to heat the water until it reached boiling point. The farfalla was tough and resisted but couldn't do anything about the temperature. It began to get soft and as the boiling water poured over it, it emitted a terrible hissing. The Wabbit increased the temperature. The farfalla was in the middle of a hurricane of scalding water. They had the upper paw now and the Wabbit decreased the water flow. The farfalla was extremely limp and fell to the ground, flopping around like a jelly fish. "I think that takes care of that," he said. Lapinette nodded and put down her fire hose. "I can't help feeling sorry for it." But the floundering gave way to twitching. The twitching gave way to spasms. Suddenly the serrated edges of the farfalla sprouted like the teeth of the hydra. They waved menacingly and started towards the Wabbit. "Any ideas?" said Lapinette. Only one," replied the Wabbit. Together they turned tail and ran down into the spiral. But the spiral began to spin faster and faster to a blur. When it stopped, they found themselves in another phantasmagorical pasta world ..
at July 15, 2022