8. The Wabbit in Old Rome World 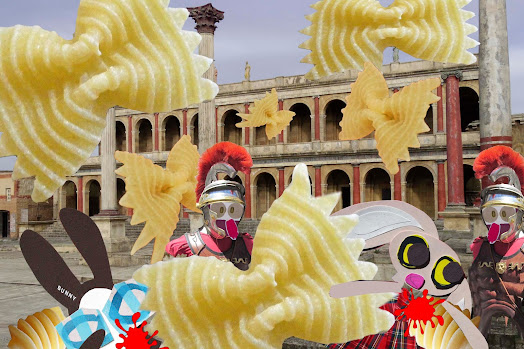 No longer in Pasta World, they'd crossed into Roman World and taken the pasta with them. "What the binky is going on?" shouted the Wabbit. "You're not supposed to be here," yelled a Roman soldier. "This is Roman World. Get out and take that pasta with you. We haven't invented it yet." The farfalle swarmed all around the soldiers. Blood spurted right and left but it was fake. Radiatori crawled around the scene getting in the way. Lapinette grimaced and wiped the spatters from her frock. She examined them, then sniffed them. "This blood is pasta sauce." The Wabbit was furious. "This whole thing is bananas," he yelled. Lapinette was horrified. "Don't mention bananas, that's tempting fate." The Roman soldiers stood stiffly to attention. "We just don't appreciate this. Rectify it immediately and begone." The Wabbit grunted. "This is all Pacchero's fault." Lapinette dragged herself from under a mountain of pasta. "I lost track of him. Where is he?" Just then a voice boomed out. "Don't worry I've got everything under control. I'm bringing you back." The Wabbit's voice was icy. "Bringing us back where?" Pacchero's voice boomed again. "Where you first started." He paused. "Where did you start? Was it Calypso World?" The Wabbit lost his temper. "It was Via Giulia in Rome," he snapped. "Rome when?" asked Pacchero. "Rome now," shrugged the Wabbit. "Rome in the 21st Century," explained Lapinette. "You know. Buses, taxis, tourists, hustle, bustle, double parking." Pacchero considered. "And just remind me - where was that again?"