5. The Wabbit & Lapinette in the Pasta Sea 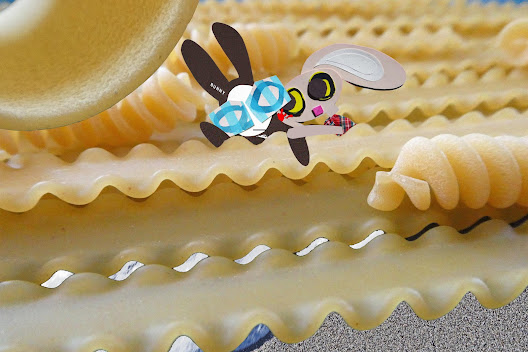 Pacchero yawed and spilled Lapinette and the Wabbit into a strange pasta sea, composed of fusilli-infested reginette. It rose and fell rhythmically just like an ocean. The reginette was sharp and the fusilli snatched at their faces. The Wabbit struck out regardless but made little headway against the reginette which threatened to drown him. Lapinette clutched onto the Wabbit - still nursing an injured paw. Blood stained the waves pink. "Cling on," yelled the Wabbit. "I don't like the look of these creatures," shouted Lapinette. "Everything's gone rogue," exclaimed the Wabbit, "The whole place is a disaster." The breakers made a woozy sound as they crashed on the beach. Lapinette disappeared beneath them for an instant but the Wabbit hauled her up. She coughed and spluttered as pasta got up her nose. Pacchero tried to right himself and the Wabbit made for the safety of their craft, dragging Lapinette behind. "Pacchero is our only hope," shouted the Wabbit. Lapinette kicked her feet for extra propulsion. A fusillo was right behind her, attracted by the threshing. It was slow but deadly and its mouth chomped relentlessly. A kick landed on its teeth and Lapinette cried out in satisfaction. "Take that for your trouble, fusillo." Pacchero called out. "This way. Over here." He righted himself and bobbed up and down on the waves. The Wabbit's paw found a grip on the edge of Pacchero's pasta body. Then he and Lapinette hauled themselves on board. "I'm headed for the control room," yelled Pacchero. "What's there?" asked the Wabbit. Lapinette gritted her teeth. "Lasagne with lasers!"
at July 09, 2022