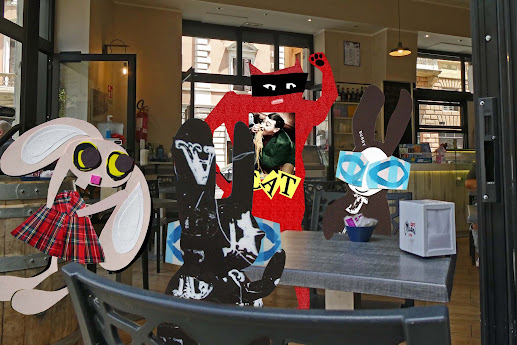 The team met at a Caffè they didn't know. Lapinette was in ebullient mood. She flew through the door and jumped in the air with delight. "What was that for a sort of Adventure?" she cried. The Wabbit looked bemused. Skratch answered immediately. "High tech narrative world making," he meaowed. "The references to Westworld were well placed to exploit the world-within-a-world approach." The Wabbit smiled. "You go too far Skratch. It was just a bit of fun." Wabsworth rapped on the table. "Let's have some order here. It was in fact a reflexive world embedded in worldly experience." Skratch let out a hiss that was close to a shriek. "It was a paradoxical transgression between the world of the telling and that of the told." Lapinette squealed. "Oooh! Gerard Genette and his extra diegetic narrator intruding into the diegetic universe!" The Wabbit nodded. "Metalepsis if you like." Lapinette clapped her paws together. "Oh, that's far too technical. I really enjoyed the story. It was great fun to be in." Wabsworth seemed pained. "It's been quite a while since I was in a story." Skratch nodded. "Me too." It was the Wabbit's turn to clap his paws - which he did twice, sharply. "I can guarantee you'll be in the next one." He paused. "Always supposing you buy me a drink." "What would you like, Wabbit?" said Skratch. "And you too, Lovely Lapinette? "I'd like something really cold," said the Wabbit. "So would I," said Lapinette. Skratch raised his paw. "Prosecco all round!" The robotic voice of the waiter sounded. "That-is-all-we-have."
at July 22, 2022