1. The Wabbit and the City of Dreams 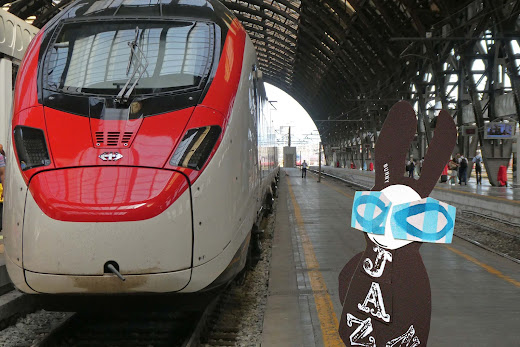 The Wabbit had just arrived on the train from Bologna. As he left the platform he cast a wry glance at the train. It wasn't Quantum. It didn't talk nor could it use lattice drive, but the Wabbit felt affectionate enough. He was anticipating a big change and he couldn't say he was entirely looking forward to it. The Department of Wabbit Affairs planned major renovations and the Wabbit had to vacate Turin to relocate in Rome. He stood and thought about it. Terni the Food Dragon was there and he might see Moloch and Panico. He was very close to Fregene for a seafood lunch and he could have some time on the beach. There were museums, theatres, art galleries - and markets of course. He might find some unobtainable items. Not too bad. It would feel like a holiday. The Wabbit reflected. He didn't really like holidays and he wrinkled his nose. There was always something unexpected happening and he had to work. He brightened. "That'd be cool," he thought. He had another look at the train. "What about the pizzas?" said the train. The Wabbit grinned as he thought of Roman pizzas. Thin crisp pizzas, no giant crusts. Potato pizzas, lots of rosemary, gnam-gnam. He paused and turned directly to the train. "Did you perchance speak to me?" The train huffed a bit and made a hydraulic sound. "I did." The Wabbit smiled. "You shouldn't speak to strange rabbits." "Everyone knows you, Commander Wabbit." The Wabbit grinned again and asked, "Wanna go for a pizza?" The train sounded its klaxon. "I have to go back to Bologna. Wanna come?" So the Wabbit hopped on board and settled in. "Don't mind if I do." He mused as the train moved off and he quoted Marcus Aurelius in a low voice. "There was a dream that was Rome ... you could only whisper it. Anything more than a whisper and it would vanish; it was so fragile ..."