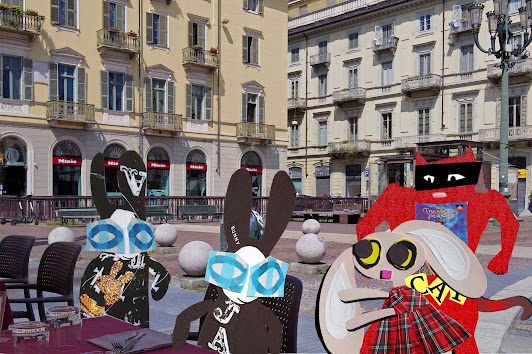 The Wabbit was waiting for everyone to converge at the Adventure Caffè. He'd grabbed a table on the perimeter and held onto it even though everyone was a little late. Wabsworth was charged with securing the Bejeweled Rabbit and he was most pleased with himself. "Is this a copy or not?" he asked, "Is it a work of art in the age of mechanical reproduction?" The Wabbit looked sideways. "It seems to have an aura and therefore it has all the qualities of the original." Skratch arrived and was quick to point out that the idea of an original was open to question. Lapinette wrinkled her nose. "I personally have held the original. I therefore have tactile knowledge." The Wabbit grinned. "So can you tell the difference?" Lapinette thought for a minute and had to make a confession. "I really cannot say." Wabsworth laughed and gripped the Bejeweled Rabbit tightly. "In principle, works of art could always be reproduced. As an android, I can say that it is not a mechanical reproduction, but a masterly work in its own right." Skratch was anxious to make another point. "But it lacks the original's location in time and space." The Wabbit scoffed. "How do you know this isn't the original? Magically transported in time and space by the mysterious figure?" Just then the Bejeweled Rabbit spoke. "Original original. I'm the original original." They all gazed at the rabbit with their mouths open. Skratch laughed. "Magic!" Wabsworth winked. "I confess. I pressed a button on the bottom." Lapinette burst out laughing. "We've been had!" The Wabbit chortled mightily. "I think it had us all right." Skratch wanted the last word. "It can no longer be treated as it used to be. But it's an authentic reproduction, not a commodity." The Wabbit laughed. "Any chance of an authentic drink?"