9. The Wabbit and the End of the Holiday 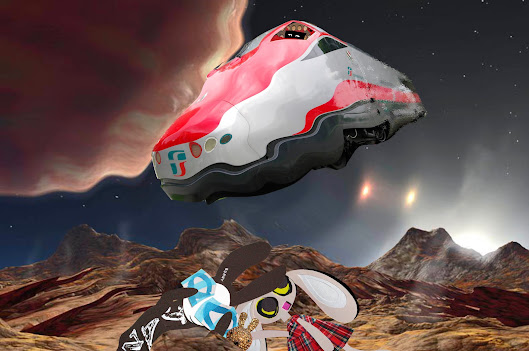 The Wabbit and Lapinette found themselves on the surface of another planet. It was dusty and dry and the Wabbit shook grit from his fur. Lapinette looked up. "That's not the sun we started with." The Wabbit agreed and said so. He grimaced. All the same, he was glad to be out of the clutches of the mysterious chocolate rabbit. He heard a familiar throbbing. It was Quantum the Time Travelling Train - and Skratch the Cat was at the controls. The Wabbit heaved a sigh of relief as Quantum descended through a heavy gaseous atmosphere that warped everything they could see. The train hovered. There was no flat surface. "You'll have to climb aboard Commander." Skratch's voice was warped too. They picked themselves up and staggered across the rough terrain. "If one more person asks me if I enjoyed my holiday, I will personally dismember them." growled the Wabbit. He waved up at Skratch. "Did you enjoy your holiday, Commander and Lapinette?" shouted Skratch. "Yes," said the Wabbit through clenched teeth. "A break is as good as a rest," shrugged Lapinette. They turned to wave goodbye to the planet. "What about the Bejeweled Rabbits?" asked Lapinette. They heard a squeak as a rabbit popped up his head. The Wabbit grabbed it by its ears. "Holiday souvenir!" he exclaimed. "Are we going to Wablantis?" squeaked the Bejeweled Rabbit. "Not just yet," replied the Wabbit. "It's earthquake season," said Lapinette. They boarded the train. Then Quantum slipped into lattice drive ..  and vanished.