3. The Wabbit and the Wolf go Shopping. 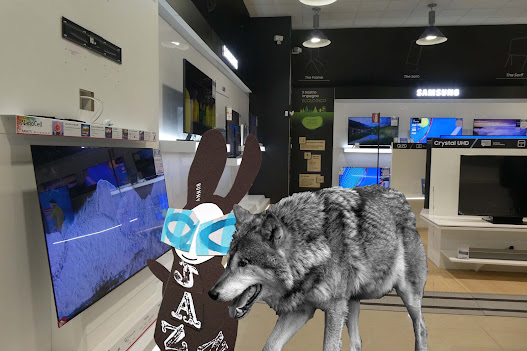 Rommy the wolf said he wanted to a look round the shops. "People will think I'm a big dog," he said. "Say woof," suggested the Wabbit. "WOOF said Rommy. "Needs practice," observed the Wabbit. They padded around the store. "What about one of these TVs?" asked the Wabbit. "It has many initials." Rommy looked the television up and down. "The upscaling isn't great. I can see the pixels." The Wabbit raised an eye and flapped an ear. Rommy laughed. "I'm a mural don't forget. I know about all manner of artistic stuff." The Wabbit was surprised. "What's your favourite show?" "Wolverine," said Rommy, "His past is shrouded in mystery." The Wabbit snorted. "Rather like yourself." Rommy growled. "Not one bit. There are so many stories about me I can hardly believe it." The Wabbit stood with his paws out, "You're supposed to be human." "Do me a favour," said Rommy, "That would be no fun. Trust the media to get everything the wrong way round." The Wabbit nodded. He could hardly disagree. "You founded Rome?" Rommy laughed. "I found Rome more like. What a terrible state it was in. Years of work it took me and my brother. Years." The Wabbit chortled. "How do you find it now?" "Awful," said Rommy. The Wabbit was lost in thought for a moment. "What about your brother Remus?" Rommy looked at the Wabbit. "He went to the other side." The Wabbit nodded again and shook his head, "It happens to the best of us." "I saw the birds you know, and that was it," said Rommy. The Wabbit made a flapping motion with his paws. "Birds," he shrugged, Rommy's fur stood on end, and he growled. "I hate cardinals the most."
[Wolf by Alexus at Pixabay]
at March 25, 2022