5. The Wabbit and the Ornithopter 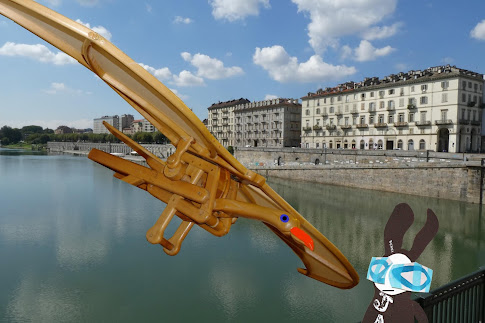 Leaving the Garibaldini to freshen up, the Wabbit walked across the Ponte Vittorio Emanuele bridge. It wasn't unusual to see birds of prey swooping in the currents. So he paid no particular attention when he saw some kind of creature coming his way. But as it came closer he could see it resembled a golden eagle. Closer and closer it came, until the Wabbit could make out its mechanical structure. His smile turned to a frown. "It's an ornithopter!" thought the Wabbit. The mechanical bird flapped its wings a little. It flew up in the air and turned around and came back until its beak was nearly level with the Wabbit. "Hello!" it squawked. Its orange beak quivered with delight. "Pleased to meet you!" The Wabbit was getting the hang of this. "Hello," he said, "Did you come with the interior designers?" The bird flew up and down along the river, then returned. "I can't find them," it said. "I was in a van and they opened the door and I flew out. Then I lost them." The Wabbit grinned. "I hardly think that matters. They seem to have lost the run of things themselves." The bird hovered. "I like this river." "Been far?" asked the Wabbit. "I went as far as a water-bound city and back," replied the bird." The Wabbit was astonished. "Venice. That far?" The bird took off at speed and returned just as quickly. "It's not that far," said the bird. "I saw lots of strange things." The Wabbit thought for a minute. "Perhaps you'd like to come to our reception?" The bird considered. He moved his head and it creaked slightly. "Any 3-in-One oil?" "All you can drink," said the Wabbit. "Original?" said the bird. The Wabbit laughed. "Totally the right stuff."
at March 04, 2021