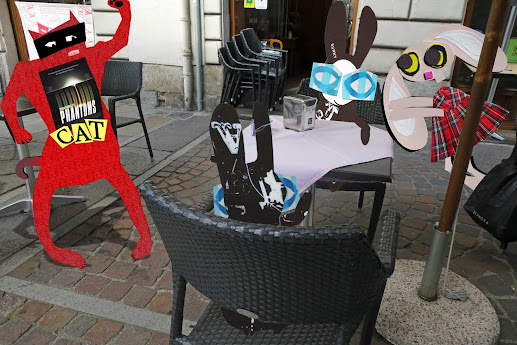 The team gathered at the Caffè of their choice but something was different. They couldn't sit beside one another. Lapinette arrived and the Wabbit got up to offer her a seat. Skratch the Cat didn't know whether he was coming or going. "It's because of this COVID crisis," explained the Wabbit, "I told them we were rabbits but they seemed adamant." Lapinette was calm as usual. "We just have to fit in," she said. "Well, I'll stay over here and shout," said Skratch. Wabsworth was fortunate in having arrived first, but he was gracious. "Sit here Skratch. I'm an android and I don't mind." "Oh, never a bother," said Skratch, "Maybe I could have that pole?" Lapinette giggled. "Dance or climb?" she asked. Skratch sat down at the next table although he felt awkward. "Perhaps I could tell you what sort of Adventure you just had?" Wabsworth quickly agreed and kept his seat. "We're looking at what I call a hauntology," said Skratch. "Derrida again!" Lapinette was quick to spot repetition. "It's extremely important, Lapinette," said Skratch. "The past living in the present is always - already." "Different forms of temporality can't be interpreted by your philosophy," said Wabsworth. "They're already both dead and alive?" added the Wabbit. "Yes, they can't be captured by the sign - or indeed, the signifier," argued Skratch. Lapinette became intrigued. "Husserl did say there are certain phenomena that cannot be perceived." The Wabbit laughed. "Husserl is a bit of a spectre when he's at home!" But it was Wabsworth who had the last word. "A spectre is haunting our table." They all paused. "The spectre of the missing drinks!" smiled Wabsworth.
[I'm indebted to Asunción López‐Varela Azcárate for Semiotic Hauntologies of Ghosts and Machines.]
at March 26, 2021