7. The Wabbit and the Friends of Turin 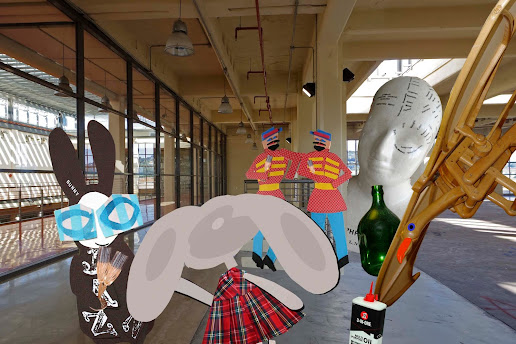 The Wabbit did his best with the venue. It was only partially in the open air, but it was spacious and accommodated the Phrenology head. The wooden bird had room to swoop and the two Garibaldini had a fence to lean on. There, they happily exchanged stories and guffawed. Everything was going to plan. Lapinette arrived. "Everyone's got something to drink but me." The Wabbit handed her a glass of Prosecco. "What's this do called?" she asked. The Wabbit laughed. "Nominally, it's the Revolutionary Friends of Torino." Lapinette pirouetted. "Introduce to me to your new pals." The Wabbit waved a paw. "These are the two Garibaldini, over there is Mr Phrenology Head and beside you, tucking into 3-in-One, is Ornithopter." Lapinette nodded politely. Everyone nodded back. The Wabbit felt obliged to explain how they arrived. "It's all the fault of the interior designers. They were planned for my Risorgimento-themed office but were overlooked in the back of the furniture truck." Lapinette made a clicking sound with her teeth. "Now you're obliged to look after them." The Phrenology head called across to Lapinette. "May I read your bumps, your ladyship." Lapinette wore a sickly expression. "My bumps are already in good order," she said. The Garibaldini were suitably deferential and bowed from the waist. "A toast to your loveliness!" The Ornithopter finished slurping 3-in-One oil. "Perhaps I could interest you in a ride?" "Later," nodded Lapinette. She sipped her Prosecco and looked daggers at the Wabbit, who ventured, "Not very sensible?" Lapinette put her paws on her hips. "I predict a riot."