6. The Wabbit and the Phrenology Head 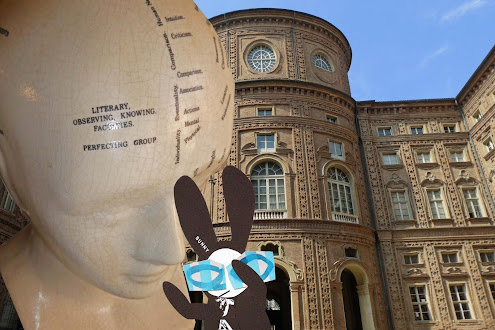 The Wabbit made his way out of the archives department of the Risorgimento Museum where he'd being carrying out research before his reception. But he'd got no further than the courtyard when a shadow fell across his path and a voice spoke to him. "May I attend your reception, Wabbit?" The Wabbit was getting used to this. "You nearly knocked me over, Mr Head." The head swayed slightly. I'm deeply sorry to startle you, Wabbit." The Wabbit didn't startle easily but he let that one go. He took a good look at the head and recognised it from the same time period as the Risorgimento. So he immediately thought of the accursed interior designers. "Did you by any chance come in a van with design people?" The head stabilised. "I found them poor company," he complained. The Wabbit sighed. "Everyone does." The head was dismayed. "I find people in this time rather shallow." "You're not alone," shrugged the Wabbit, "but how did you find out about my reception?" The head shook back and forth as if in mirth. "I was in the same van as a wooden mechanical bird, whom I did find engaging." The Wabbit gave his reception some thought. "I'm not sure I have space to get you in. Perhaps I'll hold it in the open air." The head considered it. "That would be nice. As a phrenologist, I will observe and know everyone - and their superior functions." The Wabbit smiled. "Maybe eventually." The head actually laughed. "I will add bumps to their heads." Now the Wabbit doubled up with mirth. "Can I do it?"